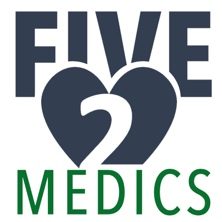 Five2Medics is an initiative of Ascension Trust and was born out of the desire to build wellness and resilience in communities. Together we aim to improve lives and reduce the impact of physical, psychological and social issues. Ascension Trust, founded by Les Isaac OBE, is a charitable organisation with a passion to improve the quality of life of the disadvantaged and vulnerable.

Five2Medics is part of Ascension Trust, a charity, registered in England and Wales. Ascension trust already delivers many projects, initiatives and partnerships at the heart of communities led by diverse groups and individuals irrespective of ethnicity, gender or class.

Since the disproportionate impact of COVID 19 on those from ethnic minorities backgrounds became apparent, Five2Medics have gathered at speed an expanding coalition of doctors, nurses, mental health workers, counsellors, social care professionals and allied health care workers to address the impact of the COVID 19 pandemic on those from ethnic minorities communities during the pandemic and beyond. Five2Medics can therefore be described as a synergy of health initiatives and partners under the umbrella of Ascension Trust whose main objective is to dismantle health inequalities and disparities in health.

As Five2Medics, our radical vision for change and transformation is to rebuild bridges of trust and reconstruct the lived narratives and build towards a collaborate and inclusive body of change. We want to create multiple platforms where those from ethnic minorities communities can see clinicians like them speaking truth and giving assurance to them especially at a time where misinformation has swamped social media. Our team have launched social media and online campaigns addressing vaccine hesitancy especially amongst key faith groups. We release health promotion videos for those from ethnic minorities backgrounds and tackle misinformation continuously.

We know that information and access to vaccines and good healthcare has to acceptable, culturally sensitive and without prejudice. We also hear from communities that structural racism needs to end and we are seeking to be that advocate to help communities thrive.

Ascension Trust is already well known for initiatives such as Street Pastors which now operates in 271 locations in urban cities, big towns and coastal areas. We deploy teams regionally across the whole of the United Kingdom. Locally in Lambeth and Southwark, our teams of Street and School Pastors have gained traction, credence and trust in communities.

Ascension Trust has developed programmes and assisted colleges and schools to offer peer mentoring to the tackle the ramifications of inequalities and provide safety for at risk youth in thoroughfares and at school gates. Over the last 5years, the organisation has galvanised people and groups from all over the country (Synergy Network) to tackle serious youth violence.

We also work closely and in conjunction with the British Transport Police to offer support to passengers feeling suicidal. This initiative is known as Rail Pastors. Our initiatives (Response Pastors) have also been called upon to bring calm and a reassuring presence in response to the Manchester bombings, the London terror attacks, the Grenfell fire and national disasters.

Five2Medics: We tackle the impact of COVID 19 on those from ethnic minorities communities and address vaccine hesitancy

Five2Medics: We tackle the impact of COVID 19 on those from ethnic minorities communities and address vaccine hesitancy

We have convened discussions with over 22 key professionals from ethnic minorities backgrounds to forge a supportive platform and generate strategies to reach those most affected.

We have promoted a COVID relief response developed by our team member, Dr John Afolayan, with Medics2you; a premier telehealth service launched as a relief project to educate and empower those from ethnic minorities communities while reducing the burden on the NHS. Our medical volunteers have been offering free community/culturally appropriate video consultations in partnership with Medics2You.

We are in the process of launching a new purpose-built Wellbeing app for those from ethnic minorities community.

We have also conducted several impactful webinars addressing issues such as vaccine hesitancy, mental health during and beyond the pandemic, institutional barriers organisations such as the NNCAUK (www.nncauk.org), webinars advocating social and moral justice in light of the impact of COVID 19 on those from ethnic minorities backgrounds (in partnership with CTBI) and health webinars for those from ethnic minorities community groups.

Some examples of our partners include:

Five2Medics: Our Surveys and Challenges

Respondents from our surveys confirmed high levels of anxiety, low mood and heightened stress as a result of the impact of COVID 19. Reluctance to seek help due to cultural insensitive approaches, suspicions and mistrust of systems were also reported. We anticipate a spike in and new presentations of mental health crisis on those from ethnic minorities communities.

Those from ethnic minorities individuals and their families are approaching us for advocacy to navigate health services and to fill the expanding vacuum of support as they suffer the impact of isolation and detachment from conventional health services. Issues around misinformation around underlying health conditions (such as hypertension, diabetes, cancer, respiratory conditions, vitamin deficiencies) and poor management or awareness of how best to manage these conditions were also identified.

Further communication barriers identified include lack of access to interpreters from specific communities or lack of cultural specific interpretation of governmental recommendations and services. As an organisation we aim to tackle these issues identified. We are working at capacity at present as a result of our current funding limitations but feel the pressing urge to expand services to meet the demand.

Five2Medics: Some examples of our successes so far

Our team of health experts are also designing at speed the ‘Ascension Hub’, a child-centred health project that builds on recommendations from the Marmot health equity review and ‘every child matters’ green paper to ensure that children from ethnic minorities backgrounds have the right start to life and that no child is left behind. This requires further resourcing particularly as this work will importantly need to consider families.